Edwin Budding: The Birth of the Lawn Mower

The birth of the lawn mower in 1830 changed the face of gardening in the 19th century. The revolutionary machine replaced the scythe, which was time-consuming and cumbersome.

Gardening took off in a big way in the 1830s, largely due to new technologies that made it easier and the availability of more diverse plants. In addition, the middle classes living in suburban Britain had more leisure time on their hands.

The Industrial Revolution had begun in the 1780s and the full effects were first felt in the 1830s. Industrialisation had started with mechanised spinning and continued with significant growth in steam power and iron production after 1800.

There was also an increase in population, leading to more middle-class people living in suburban areas. While life for the working classes was hard, some of the middle and upper classes were wealthy and had more time on their hands.

Gardens became more fashionable and a source of food, with vegetable patches and fruit trees. Middle-class people were able to devote more energy to tending their garden.

Invented by engineer, Edwin Beard Budding, who was born in Eastington, Stroud, in 1796, the lawn mower could not have been invented at a better time.

Budding was the son of a yeoman farmer, although he had a good education. Initially, he worked as a carpenter and then later he went on to work in various iron foundries, where pattern-makers were needed. He worked for more than one iron master and had a knack of solving engineering problems.

The idea for the lawn mower’s design was hatched out of watching a machine in a textile mill that trimmed the irregular surface of woollen cloth using a cutting cylinder. Mounted on a bench, the machine left the cloth’s surface with a smooth finish.

He realised that the concept could be modified to enable the cutting of grass by mounting the mechanism in a wheeled frame, so the blades would rotate close to the lawn’s surface.

Initially, Budding designed the lawn mower to cut the grass at sports grounds and in larger gardens, as it was vastly superior to the scythe. He was granted a British patent on 31st August 1830. The first lawn mower was 19 inches wide and its frame was fashioned from wrought iron.

It was described as an “application of machinery for the purpose of cropping or shearing the surfaces of lawns”. Budding said that “country gentlemen” may find mowing a “useful and healthy exercise”.

Grass clippings were propelled forward into a box, where they were collected and manually emptied.

Budding drew up a business agreement with John Ferrabee, the owner of the Phoenix Iron Works, who produced quality engineering goods. Ferrabee agreed to pay the development costs and acquired the rights to manufacture and sell the lawn mowers, which were widely available by 1831.

The partnership worked successfully, with Budding dealing with any problems in the production and Ferrabee taking care of the sales and the patent licence.

One of the first lawn mowers produced by Budding and Ferrabee was sold to London Zoo, while another was purchased by the Oxford Colleges.

Ferrabee realised that as the demand for lawn mowers grew rapidly, his own selling network, although well established, wasn’t large enough. He began to licence other manufacturers to produce more mowers.

In 1832, Ransomes of Ipswich was granted a licence to produce and wholesale Budding mowers. Ransomes was the main producer of agricultural ploughs, so it was an ideal situation, as now, the mowers were sold in a well-established network. Ransomes had sold the mowers from their Bury St Edmunds showroom before producing them.

Sadly, in 1846, Budding died of a stroke, at the age of 50. Like so many before him, he didn’t live to see the full impact of his invention.

By the 1860s, Ferrabee had manufactured around 5,000 lawn mowers at his Stroud factory. By this time, there were eight different models, with various blade sizes ranging from 16 inches to 22 inches.

Today, examples of the early Budding mowers have been preserved in Stroud Museum, Milton Keynes Museum and the London Science Museum.

Lawn mowing has come a long way since Budding invented the first mower in 1830. Keeping your lawn neat and tidy today is much simpler, thanks to inventions such as the Husqvarna Automower – this could well be the answer to your prayers!

For further information, contact Autocut South West on 0800 019 4933 and learn all about our advanced lawn mowing services.

Sorry, the comment form is closed at this time. 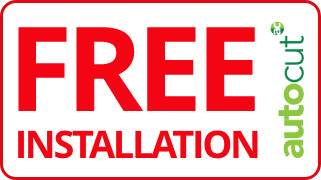